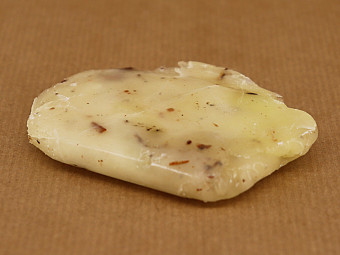 High quality "Manila" Elemi is a deliciously aromatic, soft and sticky resinoid, consisting of a solution of solid resin in essential oil. It has a light, canary-yellow color,and is largely solidified, presenting an opaque and granular fracture. Wood chips and other foreign substances are often found in this resin.

Manila Elemi is the soft, fragrant oleoresin obtained from the trunk of the Canarium luzonicum. The resin Elemi is pale yellow or greenish in color and has a balsamic fragrance, smells a bit like Fennel (Foeniculum vulgare). Through steam distillation an essential oil can also be produced. It has been used as an ingredient of incense, perfume, soaps and varnish.

Because of its drying and conserving properties, Elemi was one of the aromatics used by the ancient Egyptians for embalming their dead. Used in perfumery for centuries as a fixative and fragrance component, for example in soaps, detergents, perfumes, cosmetics. Its main use is as a fragrance in the from of oil. In tropical forest regions Elemi has been used for lighting purpose (rolled up in leaves). Occasionally is is used as an ingredient in lacquers and varnishes, where it gives toughness and elasticity to the dried film.

Canarium is a genus Burseraceae (Copal family). They are big shade trees in the Old World tropics, extending from Malaysia, Philipines to the Pacific Islands. It is a large tree up to 35 meters tall and 1 meter in diameter. It is found in primary forests in Luzon and some other islands of the Philippines. The Elemi tree is known locally as "Pili" and the gum is exported from Manila in two qualities: "Primera" which is cleaned gum and "Secunda" which is still crude and unclean.

The oleoresin is obtained from the tree the whole year round, but mainly during rainy season. One tree produces 4-5 kilos of resin a year. The resin solidifies on contact with the air and the resin stops when the tree loses its leaves. The resin, when recent, occurs in transparent, soft, granular masses, consisting of a solution of solid resin in essential oil. Externally it has a light, canary-yellow color, and, as found in commerce, is largely solidified, presenting an opaque and granular fracture, due to the crystallization of the resin. Chips and other foreign substances are often found in the solid fragments. When wetted with a little alcohol, Elemi readily disintegrates, showing a multitude of small, crystalline needles. It melts easily into a transparent fluid.

The chief constituents of Manila elemi are volatile oil and resin. The resin is a pale yellow substance, of honey-like consistency. The constituents include phellandrene, dipentene, elemol, elemicin, terpineol, carvone, and terpinolene.

Ethyl alcohol is a comparatively poor solvent for Elemi, but some perfumers prefer to extract only once with one or two parts of ethyl alcohol. It will be necessary to filtrate the extract before it cools off. A smaller yield of resinoid is thus obtained, but it presents the heart of the fragrance of Elemi in a more concentrated form and higher concentration of the rare but important oxygenated components of Elemi.

It has a fragrant, fresh terpeney, peppery, lemony, woody, balsamic and spicy fragrance. In perfumery it is a freshener and top note component. Perfume-note: Middle to Top.

The Dispensatory of the United States of America, edited by Joseph P. Remington, Horatio C. Wood and others, 1918