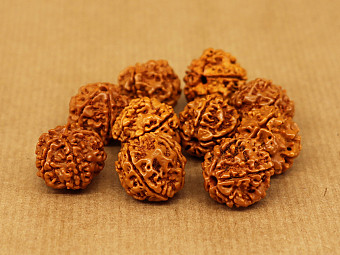 Rudraksha beads with an approximate diameter of 18 mm.

Elaeocarpus ganitrus is a large evergreen broad-leaved tree whose seed is traditionally used for prayer beads in Hinduism and Buddhism. The seeds are known as Rudraksha and are believed to be the tears of the shiva. Used for thousands of years as an aid to self empowerment and self enlightenment, the dried seeds are used as rosary beads and necklaces for meditation purposes. Hindus believe that Rudraksha beads have healing properties and that they affect the human body when worn. Related to the Heart Chakra, the Rudraksha is considered a good omen and a talisman for good health. Asian yogis and monks found that merely wearing the Rudraksha beads gave them a tremendous amount of tranquility and concentration that helped them meditate for long periods of time.

Rudraksha may be produced by several species of Elaeocarpus, however E. ganitrus is the principal species used in the making of jewellery or mala.

The five-faced Rudrakasha are most commonly found whereas the one-faced variety of Rudrakasha is rarer and and therefore very expensive.

Elaeocarpus ganitrus grows in the area from the Gangetic plain in the foothills of the Himalayas to South-East Asia, Nepal, Indonesia, New Guinea to Australia, Guam, and Hawaii. Rudraksha seeds are covered by an outer husk of blue colour when fully ripe, and for this reason are also known as blueberry beads. The blue colour is not derived from pigment but is structural. It is an evergreen tree that grows quickly. The Rudraksha tree starts bearing fruit in three to four years. As the tree matures, the roots buttress rising up narrowly near the trunk and radiating out along the surface of the ground.