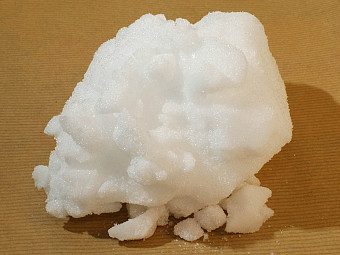 Camphor is the white crystalline substance obtained from the tree Cinnamomum camphora, native to China, Japan and adjunct parts of East Asia. The penetrating, fragrant odour is a well known preventative of moths and other insects such as Woodworm. Indeed natural history cabinets for entomologists are made from the wood. Older Camphor is bought by the Chinese at a great price and used in funeral rites but also embalming, being less volatile than ordinary Camphor.

Camphor has a big variety of uses. It has been, and still is used in the Mahashiva Ratri celebrations of Shiva, in India. It burns cool without leaving an ash residue. In the 19th century there was a big demand for it in the use of making celluloid. Other modern uses include moth repellent and other anti-insect products, embalming, fireworks. Is is an active ingredient in vapor-steam products.

Camphor trees of the Lauraceae (Laurel family) are found on Borneo, Malaysia, Sumatra, Japan, China and are a close relative of the Cinnamon (Cinnamomum zeylanicum) tree. White Camphor crystals are found in some old trees, whereas other trees produce only oil. The oil can be oxidized into crystals. Also the clippings, roots and wood chips of the tree are steam distilled to produce Camphor crystals and Camphor oil. The sturdy tree has glossy, waxy, dark green aromatic leaves. When mature, the tree can reach a height of 20-30 meters. The wood itself repels insects, moths, flies and is very durable against the erosion of salt air. The tree must be at least 50 years old to produce oil.

Camphor is poisonous if ingested in large quantities.