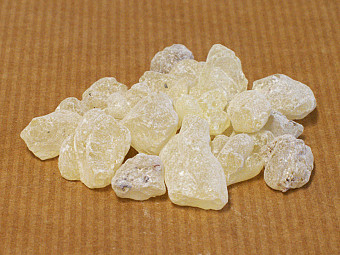 The white form of Copal has a light, bright, fruity scent. It is said to be cleansing for the spirit and can help with mental and spiritual work. Unlike the other forms, white Copal is harvested as a liquid then left until it's dried out. 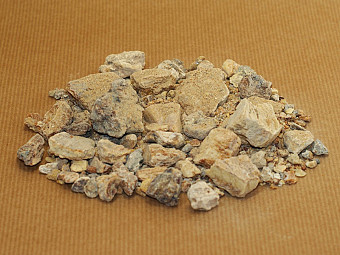 Copal is a type of resin produced by plant or tree secretions, particularly identified with the forms of aromatic tree resins used by the cultures of pre-Columbian Mesoamerica as a ceremonially burned incense, as well as for a number of other purposes. The word Copal is derived from the Nahuatl language word "Copalli", meaning "incense". To the pre-Columbian Maya and contemporary Maya peoples it is known in the various Mayan languages as "Pom", although the word itself has been demonstrated to be a loanword to Mayan from Mixe-Zoquean languages. It is sometimes likened to, or substituted for Amber and put in jewellery. Copal is still used by a number of indigenous peoples of Mexico and Central America as an incense, and during ceremonies such as the sweat lodge ceremony.

Copaifera resin has been used topically by healers in the Amazon. The incense was regarded as a seeing instrument for the Mayans and considered a form of protection against sorcery, illness, and misfortune. The incense still burns in many Mexican churches today for the purpose of making the body ritually clean. Copaifera resin is known to European medicine since 1625. Jesuits brought it back from the New World and it was called "Jesuit's Balsam" where it was used medicinally. [1][2]

Copaifera officinalis is a well branched tropical tree of the Burseraceae (Copal family), that grows up to 100 feet tall. It has pinnate leathery leaves and blossoms are borne in whitish racemes. The flowers are small and aromatic. The fruit is a coriaceous legume containing a single seed.

This item is not allowed in the following countries: