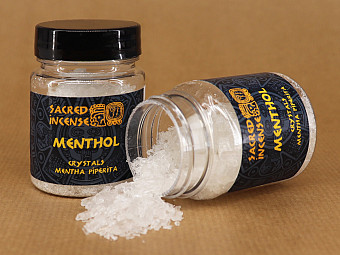 Menthol crystals can be used in purifying rituals to cleanse the space. It is also used to protect spaces and keep away unwanted energies. Similar in scent to eucalyptus, but stronger. Place on charcoal to melt the crystals and release the pure peppermint scent into the air.

Pliny tells us that the Greeks and Romans crowned themselves with Peppermint at their feasts and adorned their tables with its sprays, and that their cooks flavoured both their sauces and their wines with its essence. Two species of Mint were used by the ancient Greek physicians, but some writers doubt whether either was the modern Peppermint, though there is evidence that M. piperita was cultivated by the Egyptians. It is mentioned in the Icelandic Pharmacopoeias of the thirteenth century, but only came into general use in the medicine of Western Europe about the middle of the eighteenth century, and then was first used in England. Peppermint is one of the oldest herbs used in medicine.

Lamiaceae (Mint family). It is a herbaceous rhizomatous perennial plant growing to 30–90 cm tall, with smooth stems, square in cross section. The rhizomes are wide-spreading, fleshy, and bare fibrous roots. The leaves are from 4–9 cm long and 1.5–4 cm  cm broad, dark green with reddish veins, and with an acute apex and coarsely toothed margins. The leaves and stems are usually slightly fuzzy. The flowers are purple, 6–8 mm long, with a four-lobed corolla about 5 mm diameter; they are produced in whorls (verticillasters) around the stem, forming thick, blunt spikes. Flowering is from mid to late summer. The chromosome number is variable, with 2n counts of 66, 72, 84, and 120 recorded. Peppermint is a fast growing plant once it sprouts, it spreads very quickly.[1]

Peppermint typically occurs in moist habitats including stream sides and drainage ditches. Being a hybrid, it is usually sterile, producing no seeds and reproducing only vegetatively, spreading by its rhizomes. If placed, it can grow anywhere, with a few exceptions. Outside of its native range, areas where peppermint was formerly grown for oil often have an abundance of feral plants, and it is considered invasive in Australia, the Galápagos Islands, New Zealand, and in the United States in the Great Lakes region, noted since 1843.[1]